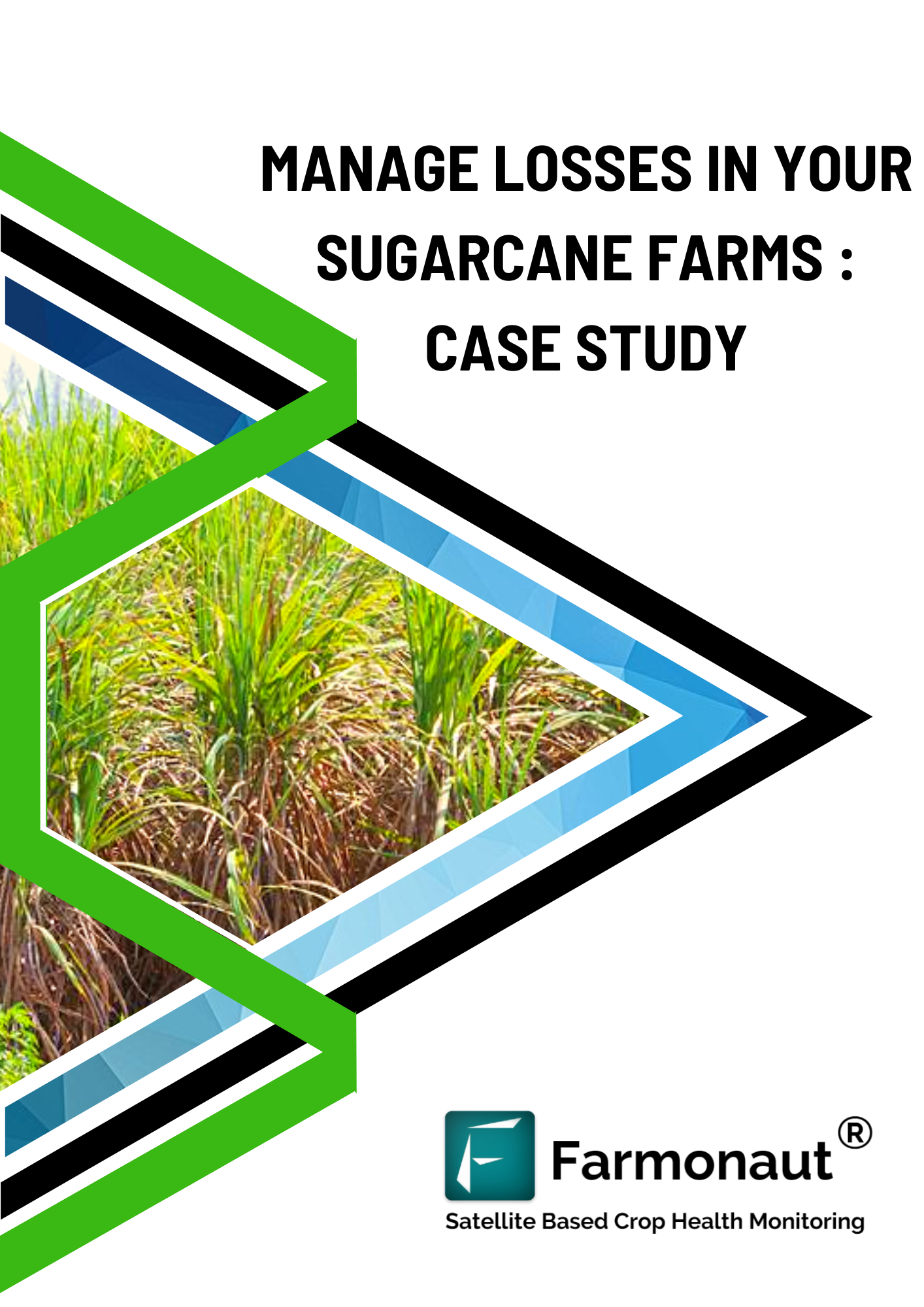 Sugarcane is the main cash crop of India as it can ensure returns even at extreme conditions with low risk. The sugar industry is the second largest agro-based industry after the textile industry. In India about 65% of farmers indulge in sugarcane farming. Sugarcane is mainly procured by the sugar mills situated at every corner of India. It is used as raw material for producing chemicals, Alcohol, paper and cattle feed apart from sugar.

India is the second largest producer of sugarcane in the world. With the increase in production the sugar industry is expanding at a fast rate. The average yield of sugarcane in India is 80-100 tonnes per hectare. Uttar Pradesh is the highest sugarcane producing state of India, followed by Maharashtra and Karnataka.

According to the Cabinet Committee on Economic Affairs (CCEA), around 360 lakh tons of sugar is likely to be purchased by the sugar mills in 2022-23. However, Sugarcane prices in India are decided by the CCEA as FRP (Fair and Remunerative prices). The approved FRP of sugarcane for 2022-23 is Rs.305 per quintal.The farmers get the prices based on the quantity and quality of sugarcanes.

LOSS IN PRODUCTION DUE TO VARIOUS FACTORS:

Farmonaut Technologies are actively providing services to various farmers for managing their farming problems through a click. Losses caused due to various parameters in sugarcane farming could be effectively controlled to a great extent by taking care of the crops. Farmonaut provides satellite images to the farmers of their farm to take necessary actions.

To elaborate, the deficiency of water, pests and insects attack, diseases caused, etc can be easily recognised at a very early stage. Once the farmer locates their farm, the satellite data gets captured that automatically generates reports for the farmers that are delivered virtually.

With the satellite data, crop health is monitored on the app. The crop health parameters such as temperature, humidity, etc are included in the reports generated. The health of the crop at different locations on the farm can be examined with the different images of satellites. The images can be easily examined through the scale provided for every image.

At early growth stages, NDVI, EVI images are more likely to be accessed as it gives the state of the plant through light reflectance. However, at the later growth stage NDRE images give better results as the chlorophyll content is higher.

In extreme weather conditions, the satellite may or may not provide accurate data, hence Radar data is also provided by us so that farmers don’t miss any important changes taking place.

For knowing the condition of the farms, NDWI, NDMI and evapotranspiration data are provided. It gives away the areas needed to be irrigated or are in extreme irrigated condition.

Farmonaut has also accurately performed the Crop area and yield estimation for various different crops. It becomes extremely useful for large areas, hilly areas or areas that are inaccessible.

The estimation can be obtained just by mapping the boundaries of the farm on the map. It would give information such as crop area sown, crop identification and sowing and harvesting pattern of the producers.

The main objective of farmers is to get better quality and quantity of sugarcane for higher profits. Knowing their farms better would result in high yield. As the losses caused by various pests and insects would be reduced. As the FRP of sugarcane is decided by the Government, the farmers have to indulge in getting higher yield for high profits.

For the sugar industries, the procurement of sugarcane would be high and the quality of the sugar production would be increased as the quality gets better. Higher recovery of sugar is important for the sugar mills as farmers want higher weight but mills want better recovery. Through water deficiency, pests, diseases, etc not only the yield for farmers gets affected but also provides low quality raw material for production of sugar, paper, alcohol, etc.

Through the estimation of crop area and yield, mills procuring sugarcane from farmers would have an upper hand in knowing the sugarcane sown area that would benefit them in decision making and allocation of the materials.

Ashok Shinde, a farmer based in Kolhapur District of Maharashtra and associated with Shree Datta Shetkari Sahakari Sakhar Karkhana Ltd., has been using Farmonaut Services for his sugarcane farms since October 2021. He also provides advice to the nearby farmers engaged in sugarcane farming. 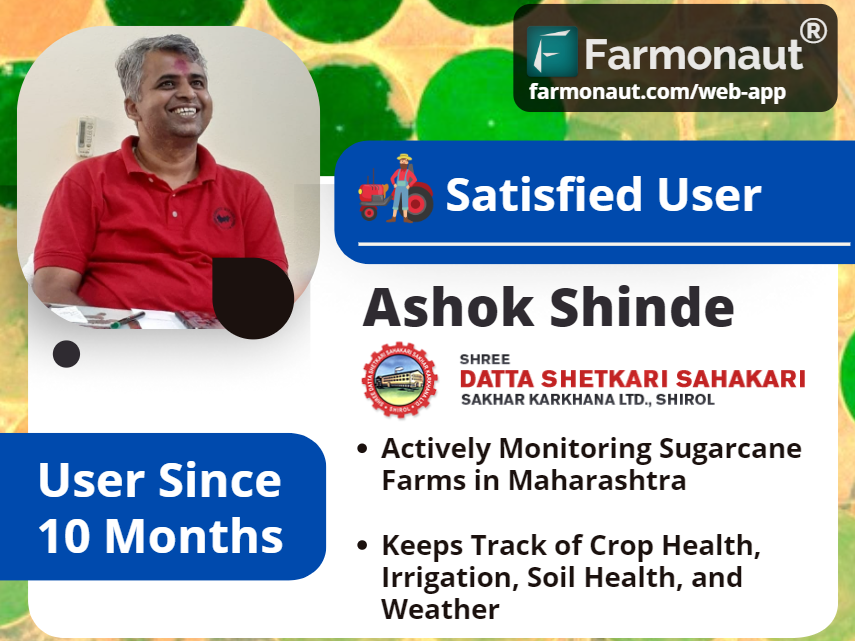 Mr. Ashok was mainly using the Farmonaut services for the irrigation problem caused, to know the irrigation patterns and to know the required areas to be irrigated. Hence, the data of NDMI, NDWI and evapotranspiration played a major role for the purpose. He received data on his mobile phone and by knowing the current status of the fields he took the necessary actions for better yield. Not only did he take actions but also cross-verified the data after the actions were taken.

As the reports generated give data on the crop health and other parameters, it helped Mr. Ashok in knowing about the temperature, pest intrusions, diseases caused, etc. Pest and diseases in sugarcane must be controlled in order to terminate spreading of it.

In his location, leaching is also a concern, and a shortage of soil organic carbon is one of the key causes of declining yields over the previous decade. Increased fertilizer use does not guarantee increased output. He is attempting to boost production by utilizing organic fertilizers. He also wants his techniques to be implemented in his area of Kolhapur for betterment of farmers..

Mr. Ashok has been a dedicated farmer and hence actively got involved with the technology (Remote sensing data) for the betterment. Even if he receives the reports at night or early in the morning, he never fails to have a glance at it for the visualized data. He also goes through the weather data on a daily basis.

Mr. Ashok Shinde has been satisfied with our Services as he adores the depth we provide.and have been using it for about 10 months now.

The losses faced by the sugarcane farming are increasing at a higher pace. The major reasons being the Deficiency of water, Pests and Insects attack, Diseases, leaching, lack of carbon content and high use of fertilizers. On managing the farms effectively losses can decrease up to 50%. Hence, to manage it Remote Sensing can be of extensive help to farmers. Mr. Ashok Shinde has been an example of a satisfied farmer of Farmonaut Technologies. He wants his techniques to be implemented over his areas in Kolhapur.